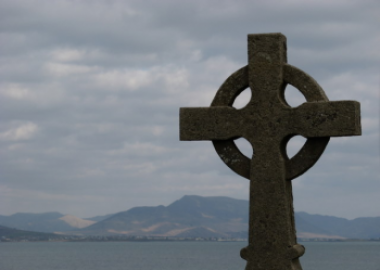 Archbishop Eamon Martin, Primate of All Ireland, gave the following homily today, Trinity Sunday, entitled ‘Being Missionary Disciples’ to the Armagh diocesan pilgrimage to the National Marian Shrine in Knock.

Everyone has their favourite Gospel passages, and the Gospel story we have just heard for Trinity Sunday is one of mine.

It’s the big ‘finale’ to Matthew’s Gospel: Go make disciples; I am with you always! You almost expect to see the credits rolling and hear the orchestra crescendo to THE END, but, of course it is not the end; it is just the beginning of the life of the Church. Jesus did not say: it is all over now, you can go back to your fishing, or farming or whatever. The disciples were given a mandate – a missionary mandate – to go out to the whole world and proclaim the joy of the Gospel. Go make disciples of all nations! To them it must have seemed a ‘mission impossible’! Acts of the Apostles tells us they just stood there, staring transfixed, as a cloud took him from their sight. But then, two men in white appeared and said to them: Men of Galilee why are you standing there gazing into the sky? – as if to say: ‘This is your time, get on with it! There is work to be done!’

And so, they courageously went out – confidently witnessing to the Risen Lord. Some of them would be welcomed; others would be ridiculed, rejected and persecuted for the faith. But everywhere they went, they carried a beacon of hope, the promise of mercy and forgiveness, and the conviction that friendship with Jesus, the Risen Lord can transform your life and give you a reason for living and a reason for hoping in the midst of so much darkness and despair.

Two thousand years later, the missionary mandate given by Jesus to His followers remains just as important. As baptised Christians we too are called to be witnesses; we are strengthened by the Holy Spirit to spread the Gospel of Christ – in season and out of season – and to renew the face of the earth.

For us too, it can sometimes seem a ‘mission impossible’. Increasingly nowadays, faithful believers find themselves ‘swimming against the tide’, their voices often drowned out, or contradicted by the noise and distractions of popular culture.

Look more closely at the Great Commission of Jesus to His disciples:

Firstly, notice that Jesus was speaking with “all the authority of heaven and of earth”- and he was commissioning his closest friends to continue his work on earth.

Secondly, the task Jesus set before His missionary disciples was to reach beyond the comfort zones of their own friends, families, neighbourhoods, and those who simply agreed with them. Go out to the whole world; bring the Good News to all the nations.

Thirdly, they were asked to baptise in the name of the Holy Trinity, and under the Sign of the Cross – Father, Son and Holy Spirit. They could expect suffering to overshadow their ministry, but they would not be alone; he would be with them always.

Fourthly, they were to teach people to observe all the commands He had given them – not to pick and choose. At times this would mean saying No to the world, turning away from sin and evil, and committing fully to the Gospel. As Jesus had previously said: if you love me, keep my commandments.

Pope Francis is convinced that Christians today are living in a new time of mission for the Church. He challenges us to put everything we do, as Church, into a new key – a ‘missionary key’.

‘I dream of a missionary option, that is, a missionary impulse capable of transforming everything, so that the Church’s customs, ways of doing things … can be suitably channelled for the evangelisation of today’s world rather than for her self-preservation’ (Pope Francis’ first Apostolic Exhortation Evangelii Gaudium The Joy of the Gospel, 27). And again the Holy Father writes:

‘Pastoral ministry in a missionary key seeks to abandon the complacent attitude that says: ‘We have always done it this way’. It invites everyone to be bold and creative in the task of evangelisation (Evangelii Gaudium, 33).

The result of Friday’s referendum on the Eighth Amendment confirms that we are living in a new time and a changed culture for Ireland. For the Church it is indeed a missionary time, a time for new evangelisation.

Like many others who advocated a NO vote in the referendum, I am deeply saddened that we appear to have obliterated the right to life of all unborn children from our constitution and that this country is now on the brink of legislating for a liberal abortion regime.

I am very concerned about the implications for society of interfering with the fundamental principle that the value of all human life is equal and that all human beings, born and unborn, have inherent worth and dignity. At a time when scientific and medical evidence is clearer than ever about the beginning of life, we have effectively decided that some human lives – in this case the lives of the unborn – are less significant and deserving of protection than others.

We have elevated the right to personal choice above the fundamental right to life itself.

In January I called upon Catholics to be “missionaries for life” in their families and communities. As a bishop I have been overwhelmed by the witness of so many people who made such a huge effort to remind us that in pregnancy we are dealing with two lives – both in need of love, respect and protection. In particular I have been humbled by the witness of lay women and men, many of them mothers and fathers themselves, who became the voice for voiceless unborn children. The pro-life cause in Ireland is now more important than ever as we endeavour to touch the hearts of women who will continue to face crisis in their pregnancy and find new ways of supporting them and their unborn children. The increased prevalence of violent death on our streets reminds us that striving to build a culture of life in Ireland is more relevant and pressing than ever.

We are told that people voted Yes for many reasons. Like many others I too found myself challenged by the personal stories of so many women in Ireland both on the Yes and the No sides. I have realised how little I know personally about the pressures these women can be under and how so many of them feel isolated, neglected and alone in their distress. Tragic, and sometimes desperate, situations like these will not go away just because, as is now expected, abortion is made widely available in Ireland. The question remains: How can we channel the obvious care and concern of so many good people in Ireland to genuinely and practically help vulnerable women who feel that the only way out of crisis is to end the life of their unborn child? How can we together show genuine “compassion” in the literal sense of “suffering with” women in their vulnerability? What new supports, apart from the option of abortion, will be in place for mothers and fathers at the point of crisis? And will our compassion extend to the life of the unborn child? These questions remain for the whole of Irish society, including the Church.

In the midst of so much disappointment for those who voted No to repealing the Eighth, it remains as important as ever to affirm the sanctity of all human life, and that the direct and intentional taking of the life of any innocent human being is always gravely wrong. Sadly in many countries of the world the Church must proclaim this Gospel of Life in the context of abortion being widely available, and where people are increasingly becoming desensitised to the value of every human life.

To continue to proclaim this truth, in love, may sometimes seem like a ‘mission impossible’, but Pope Francis makes it clear in his Apostolic Exhortation Gaudete et Exsultate – published in April, on holiness in today’s world – that this is not optional for Catholics: “Our defence of the innocent unborn … needs to be clear, firm and passionate, for at stake is the dignity of a human life, which is always sacred and demanding of love for each person, regardless of his or her stage of development”.

Thankfully we are not alone. In today’s Gospel story the Lord Jesus Himself assured His missionary disciples: Know that I am with you always, yes to the end of time. Amen.