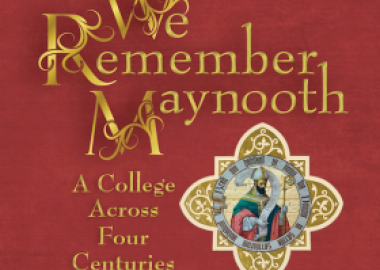 This year Maynooth College celebrates its 225th anniversary and a beautifully-presented volume captures a multi-dimensional perspective of an institution that has held a singular place in modern Irish Church history. We Remember Maynooth: A College Across Four Centuries, edited by Salvador Ryan and John-Paul Sheridan is a collection of essays that paints a rounded picture of a unique college, through whose hallowed halls have passed both kings and popes.

From modest beginnings in 1795 as a small seminary of thirty students and ten professors, Maynooth expanded rapidly, becoming a Pontifical University, a constituent college of the National University of Ireland and, at one time, the largest seminary in world. It has educated many thousands of students and led the way in many branches of the arts and sciences. And for its alumni it is also a tapestry of rich memories.

Lest these memories dwindle in the collective consciousness, the authors have complied a selection of pen pictures, personal reminiscences and sketches on aspects of the college’s life and history. Contributions range from across the spectrum of religious, artistic, political, and academic endeavour, with essays by Archbishop Eamon Martin, Mary O’Rourke, Frank McGuinness, Susan McKenna-Lawlor and Liam Lawton, among many others.

This splendid book is part history, part folk-history, part aide-mémoire. For some, it will be an introduction to this historic centre of learning, for others it will be an evocation of memories, reminiscences and encounters, some that describe actual events and others that delve between the lines of history offering portraits of characters that passed through the college and the people that journeyed with them.

Salvador Ryan is Professor of Ecclesiastical History at St Patrick’s College, Maynooth and has published widely on popular religious culture from the Middle ages to the twentieth century. John-Paul Sheridan is a priest of the Diocese of Ferns. He joined the staff at St Patrick’s College Maynooth as Education Programmes Coordinator and currently lectures in Religious Educations and Catechesis, Liturgy and Children and Systematic Theology.

We Remember Maynooth: A College Across Four Centuries, edited by Salvador Ryan and JP Sheridan is published in Ireland and the UK by Messenger Publications. Priced at €50/£40