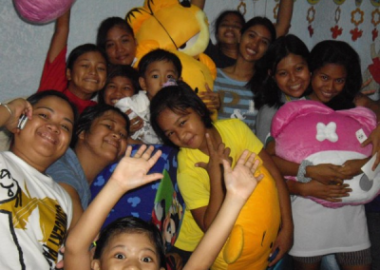 Christmas is a time of year when we can hope for a real messiah, a moral leader to rise up and inspire us to live good, moral lives of integrity and mutually helping of each other and the poor- the great values brought into the world by the birth of Jesus of Nazareth that we love one another as we love ourselves. Some people think self-love is selfish love yet it is in fact a positive force.

It is having principles, spiritual values of honesty, compassion, caring for others and taking a stand with the poor and the oppressed and seeking justice for them by action that is risking oneself and serving others. It is being a washer of feet. It is having true convictions of our own dignity and recognizing that same dignity in everyone else whom we respect and are willing to help.

So loving others as ourselves is living out the great values that help to bring about a society that is based on good governance and social justice and working for equality and a decent life for all. Above all, it is having a profound respect for life itself, the rights of every person and every living creature and organism and the planet itself, which sustains our lives. We need to have the courage to take a clear stand for the victims of oppression and injustice even if it means risking ourselves.

These are some of the great lasting values and ideals brought to us by Jesus of Nazareth. The most important values taught by him were recognizing children as the most important of all, having equality and deep respect for women and for the downtrodden.

The Christmas story is based on the promise of a leader who would enlighten the world and lead it along a moral path to a relationship with a loving, caring father. But it is a story that does not fail to tell us the painful truth of injustice and oppression in our society that we have to challenge, confront and overcome by non-violence. One way is by building a prophetic community that comes together as one to stand for human rights and the intrinsic value of each human person.

We read the Gospel story of the birth of Jesus, born in poverty, one of the poor, rejected by the inn where there was no room for a pregnant woman about to give birth. Then when Mary, the mother of Jesus did give birth, they had to flee and escape the unmerciful and vengeful war-of-terror and killing of children by Herod, the corrupt leader himself. It is a story of how the parents fled into Egypt with the child Jesus, refugees seeking shelter and safety.

In today’s world, we see a similar war against the poor, killing without mercy, the rejection of refugees, the closing of doors and borders to keep them out and let them die of torture, violence and hunger in their own countries where famine is the scourge of the nation and where cruel tyrants rule with impunity.

Consider the plight of the Rohingya, the starving children in Yemen, the victims of war, mass killing in South Sudan and the Congo. They are just some of the most horrendous atrocities done in the most violent places on earth. Global justice is what is needed more than ever before. Nations need to put their national economic interests to one side and put the human needs of the suffering people first. These are the injustice and acts of inhumanity that Jesus came to challenge and so we must do likewise as such atrocities are an attack on humanity itself.

Christmas is about the respect that we have for children above all and those oppressed and persecuted as Jesus was and so we have to support the many abused and neglected children who have suffered and with faith, resilience and courage overcame the hardship. Ending the widespread abuse of children ought to be our commitment and goal and resolution for the New Year and ought to be our hope this Christmas and for the future.