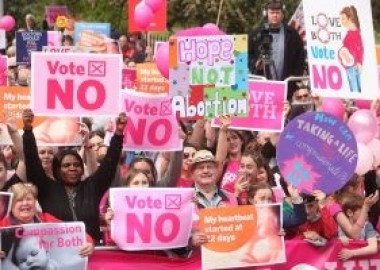 According to Dr Mary Holohan the “medical needs of the mother do not require removal of the Eighth Amendment” but “there appears to be a campaign strategy to create a contrary impression.”

Thousands gathered in Dublin on Saturday to say ‘Love Both’ and ‘Vote No’ to abortion on demand. Pic John Mc Elroy.

A consultant obstetrician at the Rotunda Hospital in Dublin has hit out at claims that doctors are prevented from treating seriously ill women in pregnancy by the Eighth Amendment.

In a letter to newspapers on Monday, Dr Mary Holohan described the claim as a “false allegation” and part of a strategy by doctors campaigning for the Repeal of the Eighth Amendment.

Dr Holohan is a practicing consultant obstetrician with 30 years’ experience. She has previously served as Dean of Professional Competence in the Royal College of Physicians.

In her letter, she said the “medical needs of the mother do not require removal of the Eighth Amendment” and that “there appears to be a campaign strategy to create a contrary impression in the minds of the public.”

Many of her colleagues in Obstetrics share her concern about this “false allegation”, she said.

Dr Holohan advised the previous coalition Government as part of the Department of Health-established ‘Expert Group’ in the run-up to the 2013 Protection of Life During Pregnancy legislation.

She is not aligned with any campaign group on either side of the referendum campaign.

She highlighted that the risk to women’s lives does not have to be imminent for doctors to take all necessary steps to protect women’s lives and health. The current law and official guidelines are “very clear in this regard,” she argues.

“Regarding the assertion that women have died because of the 8th Amendment, Dr Peter Boylan cites as ‘evidence’ three cases,” she said in her letter.

However, she warns that “On closer examination, however, none of these supports his contention.”

“As persons trusted by the public to give expert advice and opinion, doctors should avoid giving inaccurate or misleading information whether to advance personal, political or philosophical views or not,” Dr Holohan challenges.