Meditations for Good Friday Via Crucis at the Colosseum 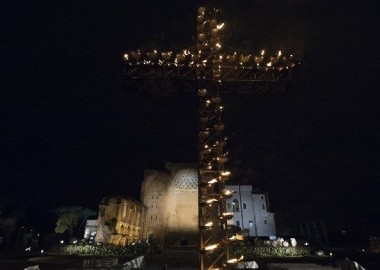 Sr Eugenia Bonetti presents her meditations for the Way of the Cross at the Colosseum, to take place in Rome on Good Friday. The 14 Stations highlight the victims of human trafficking, minors who are bought and sold, prostituted women, and migrants.

Sr Eugenia Bonetti is a Consolata Missionary and President of the Association “Slaves no more”. Pope Francis invited her to prepare the meditations for this year’s Way of the Cross, at the Colosseum in Rome on Good Friday. Drawing from her experience in fighting the scourge of human trafficking, Sr Bonetti has highlighted the plight of those who are suffering new forms of crucifixion in society today.

Hearing the cry of the poor

In the First Station, it is Pilate who inspires us to pray for those in positions of power to “hear the cry of the poor”, the cry of all those who are condemned to death by the indifference generated by exclusive and selfish policies. In Jesus who takes up the cross, we are invited to recognize those facing new forms of crucifixion today: the homeless, young people without hope, employment or future prospects, and immigrants forced to live on the margins of society, after facing incredible suffering. Children too, are discriminated against because of the color of their skin or their social class.

Seeing those in need

In Jesus’ meeting with Mary, we can see all those mothers who let their young daughters leave for Europe in the hope of helping their families who live in extreme poverty. Instead, they find humiliation, contempt, and even death. When Jesus falls the first time, we remember the human frailty and weakness of the present-day Samaritans who tend to the many physical and moral wounds of those who live in fear, loneliness and indifference. Unfortunately, we are often no longer capable of seeing those who are in need, writes Sr Bonetti. We forget the poor and the last in line. We must ask God to help us to love, to be sensitive to tears, suffering and the cry of pain of others.

The victims of trafficking

In the Way of the Cross, she writes, we see the many children who cannot go to school, those who are exploited on land and sea, bought and sold for their bodies by human traffickers. These are the minors who are deprived of their right to a happy childhood. When it comes to human trafficking, Sr Eugenia Bonetti writes that we need to be aware of how we are all responsible for the problem, and how we must all be part of the solution. She sees this reflected in the Eighth Station, when Jesus meets the sorrowful women. Women, especially, she writes, are called to see and act with courage.

In the Ninth Station, Jesus falls the third time, exhausted and humiliated under the weight of the cross. Sr Bonetti relates this moment to the humiliation of the many girls who are forced onto the streets by groups of slave traffickers: girls who can no longer endure having their young bodies abused and destroyed, along with their dreams. They are the fruit of a throwaway culture which treats so many people as waste.

The idols of power and money

The image of Jesus being stripped of His garments can be compared to all the minors who are stripped of their dignity, reduced to being merchandise. Sr Bonetti invites us to reflect on the timeless idols of power and money, which fool us into believing everything is buyable. Still, there are those who risk their lives to save others, especially in the Mediterranean: they go out of their way to help other human beings fleeing from poverty, dictatorships, corruption, and slavery.

The hope of His death and resurrection

The Final Station of the Via Crucis sees Jesus placed in the tomb. This inspires us to think of today’s “new cemeteries”: the deserts and seas, where men, women, and children we could not, or would not, save, find their eternal resting place. While governments hold discussions, locked up in their “palaces of power”, writes Sister Eugenia Bonetti, the Sahara Desert is filled with the skeletons of people overcome by hunger and thirst. The sea, meanwhile, has become a watery tomb.

The meditations for this year’s Way of the Cross conclude with the hope that Jesus’ death may give national and international leaders an awareness of their role in defending every human person. May His resurrection be a beacon of hope, joy, new life, acceptance and communion between peoples and religions.