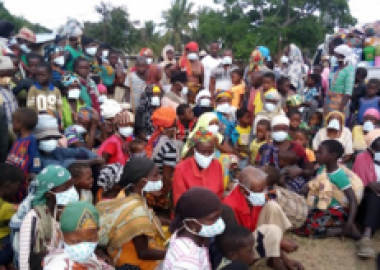 Aid to the Church in Need is sending an emergency aid package of €100,000 (£89,375) to Mozambique after extremists linked to Daesh (ISIS) beheaded more than 50 people. The charity announced the aid today (Tuesday, 10th November), following news of the atrocities, which have been confirmed by police.

The violence is the latest in a string of more than 600 attacks in the Cabo Delgado province, where up to 2,000 people have died and 310,000 have been made homeless.

Speaking to ACN, Sister Blanca Nubia Zapata said the attackers, from a group calling itself Islamic State in Central Africa, were forcing people from their homes.

She said: “It seems as though they are trying to evict the entire population of the northern part of Cabo Delgado province, expelling the ordinary people without the slightest vestige of compassion. Over 12,000 people have arrived here in the past two weeks. We can’t keep up. Women and children are arriving, and older people who have been walking for days. Some have died on the way, on the roads and the forest tracks.”

Reports said the militants turned a football pitch in the village of Muidumbe into an “execution ground” and that more than 15 children and other young people were killed.

Sister Blanca said: “We are doing all we can. Very often, we can do no more than listen [and] ask how they are feeling… They’ve left everything behind, hoping to escape with their lives. All they want to do is to get away from there. They are simply terrified. Many of the families have asked our help, and we have rescued the families of the children at the school with immense difficulty, with private vehicles and the help of third parties. “Regina Lynch, ACN International head of projects, said: “We want to help the Diocese of Pemba and the neighbouring dioceses with emergency aid for the victims of Cabo Delgado, on top of the projects we are already sponsoring within the dioceses for their priests and religious… It looks as though there is finally some international attention being paid to this long-running and largely forgotten tragedy over many long and painful months…

“They have burnt down churches and destroyed convents, and also abducted two religious sisters. But almost nobody has paid any attention to this new focus of terror and jihadist violence in Africa, which is affecting everybody, both Christians and Muslims alike.”