December 19th, 2015
"The Angel said to Zechariah; 'Do not be afraid, your prayer has been heard. Your wife Elizabeth is to bear you a son and you must name him John." Luke 1 : 13 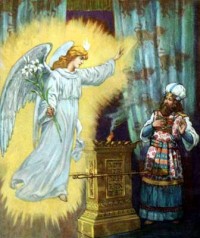 Zechariah and Elizabeth had been praying all their married life to be blessed with a child.  But it seemed as if God had ignored their request even tho’ they had lived exemplary lives and would have made excellent parents.  But they didn’t complain.  Even in his old age Zechariah continued to carry out his priestly duties in the Temple.  Indeed it was while he was in the sanctuary burning incense that the Angel brought the Good News that his wife Elizabeth was to bear him a son.  We could hardly blame Zechariah for doubting the Angel’s message considering that they are both very old.  But so that he wouldn’t think afterwards that it was all a dream Zechariah was left speechless until John (the Baptist) was born.  God had certainly answered their prayer.  Not only would they have a son but he would become the one who would prepare the people for the coming of the Messiah.  We can see why this story comes in the Advent liturgy so close to Christmas.

Lord we pray that all married couples may experience the joy that children bring to a home where they are welcomed and loved. Amen