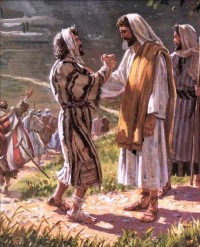 A leper came to Jesus and pleaded on his knees. ‘’ If you want to ‘’ he said, ‘’ you can cure me.’’ Feeling sorry for him Jesus stretched out his hand and touched him.’’ Of course I want to ‘’ he said.’ ‘’Be cured’’ And the leprosy left at once and he was cured. Jesus immediately sent him away and sternly ordered him,’’ mind you say nothing to anyone, but go and show yourself to the priest, and make the offering for your healing prescribed by Moses as evidence of your recovery. ‘’The man went away, but then started talking about it freely and telling the story everywhere, so that Jesus could no longer go into any town, but had to stay outside where nobody lived. Even so people from around would come to him.

Jesus is moved with compassion for the man. He stretched out his hand and touched him. The healing is complete.

‘’Of course I want to,’’ he said ‘’be cured.’’ O.T. regulations, healing from leprosy required showing proof of this to the priest, making an offering prescribed by Moses as evidence of the recovery. Jesus ordered him not to tell anyone. The man went away, started telling everyone, the messianic ‘’secret’’ vanishes.  Jesus had to stay in places where nobody lived. People from all around would come to him. They knew he was different from the Scribe, his authority in word and deed.

Lord Jesus, may we reflect your compassion for the vulnerable. Amen