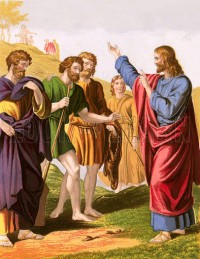 Shortly after the call of Andrew and Peter, Jesus called Philip to follow him. Philip immediately went to find his friend Nathanael to tell him about Jesus “the one Moses wrote about in the Law.” Nathanael was a bit sceptical when he heard that Jesus was from Nazareth. Philip urged him to at least meet Jesus. It was an invitation to “come and see.” The meeting between Nathanael and Jesus is a grace filled moment for Nathanael. The words of Jesus penetrate his heart. All his prejudices are set aside. Immediately he proclaims that Jesus is the Son of God. He follows Jesus and becomes one of his apostles, identified as Bartholomew in the other gospels. The quality that Jesus praises in Nathanael is his honesty. He describes him as an “Israelite incapable of deceit.” Nathanael was someone on whose heart the message of Jesus could easily be written and read by others.

Spirit of Truth we ask you to help us to be more open, sincere, and honest in our dealings with each other. Amen