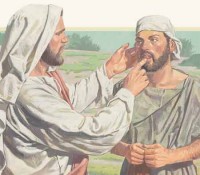 In to-day’s Gospel Jesus was driving out a demon that was mute.  When the devil left,  the man who was mute spoke,  and the crowd were amazed,  but some of them said; ‘By Beelzebub,  the prince of devils,  he is casting out demons.”  Others tested Jesus by asking for a sign from heaven.   Some of the Pharisees followers drove out demons,  if this was so,  the Pharisees accusations were becoming more desperate.  To accuse Jesus of being empowered by Beelzebub,  the prince of demons, because Jesus was driving out demons was also to say that the Pharisees followers were doing Satan’s work.  Jesus turned the religious leaders accusation against them.  Another possibility is that the Pharisees followers were not driving out demons,  and if they tried,  they did not succeed.   Then Jesus engaged in a little irony,  saying; “Why would the devil drive out his own demons?”  He dismissed their claim as absurd.  Finally he concluded that the Kingdom of God has arrived.

Satan who had controlled the kingdom of this world for thousands of years,  was not being controlled and overpowered by Jesus and the Kingdom of Heaven.   Jesus’ Kingdom began to come into power at Jesus’ birth,  grew as He resisted the desert temptations,  established itself through his teachings and healings,  blossomed in victory at the Resurrection and at Pentecost and became permanent at his second coming.

Tho’ these two interpretations may differ,  they arrive at the same conclusion – the Kingdom of God has arrived with the coming of Jesus Christ.

Prayer Lord God you have laid down your precepts to be kept. May my footsteps be firm in keeping your commands. Amen
« Go back one day Go forward one day »