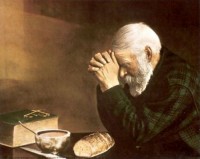 The disciples from Emmaus had been counting on Jesus to redeem Israel – that is, to rescue the nation from its enemies.  Most Jews believed that the Old Testament prophecies pointed to a military and political Messiah; they didn’t realise that the Messiah had come to redeem people from slavery to sin. At the death of Jesus, they had lost all hope. They didn’t understand that Jesus’ death offered the greatest hope possible. Despite the women’s witness, which was verified by other disciples, and despite the Biblical prophecies of this very event, they still didn’t believe. In spite of two thousand years of evidence and witness, many people still refuse to believe.

The two disciples were so caught up in the world’s admiration of political power and military might that they were unprepared for the reversal of values in the Kingdom of God – that the last will be first, and that life grows out of death. The world has not changed its values: a suffering servant is no more popular today than 2,000 years ago.

Prayer Lord, may your Word find a home in my heart, when I study and pray the Scriptures. Amen
« Go back one day Go forward one day »