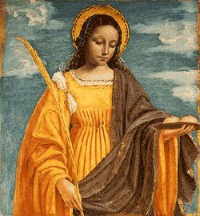 Jesus’ cousin Lohn was killed because he spoke the truth. In a secret way his death was planned by Herodias through the request of her daughter to Herod.  It was a pity for Herod himself loved John but had made a promise to Herodias when he saw her dancing.  He felt trapped but stood by his promise. Jesus said the truth will set you free. Herod obviously had other ideas and so the death of John the Baptist took place during a party. It must have bothered him later when he had time to think.

Today is the feast of St. Agatha,  who died a martyr for the faith at Catania in Sicily in the third century.

Jesus stay with in every decision we make. Help us to stop, think and pray so that all our decisions are based on your law of love. Give us a clear mind to see the snares of the evil one as we go through our daily lives. Keep us close to you. Amen