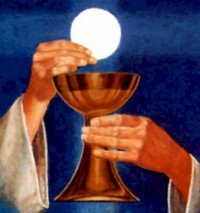 Jesus drew crowds no matter where he went because of his healing miracles but few recognised that he was the promised Messiah.  Most of the religious leaders rejected him and tried to persuade the people that his powers came from an evil source.  His message was too challenging for them. Continuously they asked him for signs despite the fact that he had shown his power to even raise the dead.  In today’s gospel we hear the exasperation in the words of Jesus.  These people are able to read the weather signs but they are unable to read the meaning of his miraculous signs.  We ask ourselves would we have recognised Jesus if we lived in first century Palestine?  We like to think that we would have become fervent followers if we had had that privilege.  But in the Eucharist Jesus is present to us in a more personal way then he could ever have been during his earthy life.  Do we allow the Eucharistic Lord to transform our lives?  Or are we like the
people in first century Palestine who heard but never allowed the words of Jesus to change their hearts?

Prayer Blessed are you, Father, Lord of heaven and earth, for revealing the mysteries to mere children. Amen
« Go back one day Go forward one day »