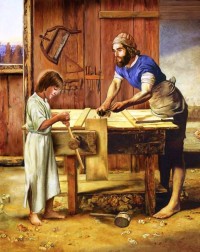 The reference to ‘son of Mary’ might indicate that at this time Mary was a widow. Jesus was teaching effectively and wisely, but the people of his home town saw him as only a carpenter.  “He’s no better than the rest of us are – he’s just a common labourer,” they said. They were offended that others could be impressed by Jesus and follow him. They rejected his authority because he was one of their peers. They thought they knew him, but their pre-conceived notions about who he was made it impossible for them to accept his message. We must not let prejudice blind us to the truth. As we learn more about Jesus, we must try to see him as he really is.

What the inhabitants of Nazareth lacked was not the belief that Jesus had the ability to heal, but faith that the power of God was at work in him.

Prayer Lord, help me to trust that you can be found in the most unlikely places and in people who seem just ordinary. Amen
« Go back one day Go forward one day »