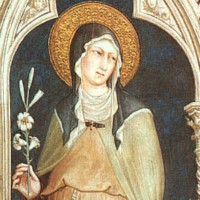 “Our labour here is brief,  but the reward is eternal.  Do not be disturbed by the clamour of the world, which passes like a shadow.  Do not let false delights of a deceptive world deceive you.”  (St. Clare)

St. Clare,  born at Assisi in 1193,  died 1253.  She followed St. Francis in his life of poverty and was founder and ruler of the Poor Clares.  She led an austere life,  abounding in works of piety and charity.  She is Patron of television.