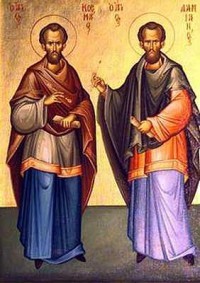 Our Lord has just healed an epileptic boy who was under the influence of an evil spirit.   It was this miracle that won the people’s admiration but Jesus wasn’t the kind to be carried away by popular acclaim.  His main concern was preparing the Apostles for his suffering and death.  For the second time in the space of a few days he predicts his Passion,  but the disciples didn’t understand.  How could they!  Like so many others they still thought of the Messiah in terms of power and glory.  And they thought of themselves as sharing in that privileged position.   It’s only after the Resurrection and coming of the Holy Spirit that the Apostles will see things differently.  Filled with the Spirit of the Risen Lord they begin to realise that as his true followers they are called to renounce self,  take up their Cross and put themselves whole-heartedly at the service of others.

Throughout the course of the Church’s history Christians have struggled to live by Gospel values – to be guided by a vision which runs contrary to worldly values.  As followers of Christ today we too are challenged to take up our cross daily remembering that “those who want to save their life will lose it;  those who lose their life for Christ’s sake will save it.” (Luke 9 : 24)

Lord by your Cross and Resurrection you have set us free. You are the Saviour of the World. (Mystery of Faith - at Eucharist) Amen