Feast of St. Gregory Nazianzen, Bishop & Doctor of the Church, also Feast of St. Basil the Great, Bishop of Constantinople 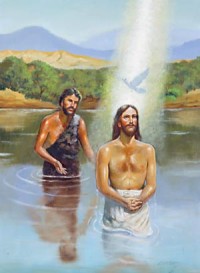 The last of the great prophets was John the Baptist.  John united the old and the new Testaments for he was the bridge that joined them.  He said of himself that he was “a voice crying in the wilderness”, calling on all people to make a place in their hearts for Christ.  As he pointed out; “The Kingdom of God was close at hand.” (Matthew 3 : 1)

For centuries the prophets had been foretelling the coming of the Messiah, Jesus Christ.  Now, the time had come and Jesus is here among us.   Isaiah had said of John that his mission was to “prepare the way of the Lord, make his paths straight.” (Matthew 3 : 1)

When John baptised Christ in the river Jordan,  he saw the Spirit of God come down and rest on Jesus.  So,  he said to the people; “I am the witness that he is the chosen one of God.” (John 1 : 14)   Later,  Christ said of John that a greater than John the Baptist has never been seen.  He was the humble unselfish prophet,  ready and willing to hand over his apostolate to Christ,  the Messiah.   As he humbly said; “He must  grow greater,  I must grow smaller.” (John 3 : 30)

Prayer May God give us the strong, unwavering faith in Christ that shone out so strongly in the life of John, the Baptist. Amen
« Go back one day Go forward one day »