Feast of St. Hilary, Bishop & Doctor of the Church 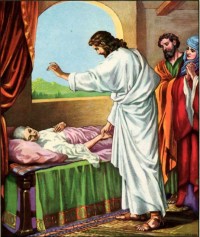 On leaving the synagogue, Jesus went with James and John straight to the house of Simon and Andrew. Now Simon’s mother in- law had gone to bed with a fever, and they told him about her straightway. He went to her, took her by the hand and helped her up. And the fever left her and she began to serve them.

That evening, after sunset, they brought to him all who were sick and those who were possessed by demons. The whole crowd came crowding around the door and he cured many who were suffering from diseases of one kind or another, he also cast out many devils, but he would not allow them to speak, because they knew who he was.

In the morning, long before dawn, he got up left the house and went off to a lonely place and prayed there. Simon and his companions set out in search of him, and when they found him they said. ‘’ Everybody is looking for you.’’ He answered ’’ Let us go elsewhere to the neighbouring country towns, so I can preach there too, because this is why I came. ‘’ And he went all through Galilee preaching in their synagogues and casting out devils.

The healing of Peter’s mother – in – law is described briefly without details. He took her by the hand lifted her up the fever left her. The miraculous cure, suddenness and completeness, she begins serving. The focus is Jesus’ healing power.

Jesus continues his healing into the evening, the possessed, many who were suffering from diseases. Early morning Jesus withdrawing to a lonely, quiet, place to pray be with God. He continues his mission preaching in the synagogues and casting out devils.

Jesus, we come into your presence in prayer. Amen