Feast of St. Ita, “Foster Mother of the Saints of Ireland” 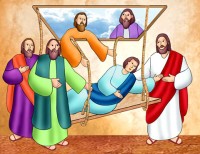 When Jesus returned to Capernaum, word went around that he was back, so many people collected there that there was no room left, even in front of the door. He was preaching the word to them when some people came bringing him a paralytic carried by four men, but the crowd made it impossible to get the man to him, they stripped the roof over the place where Jesus was and when they had made an opening, they lowered the stretcher on which the paralytic lay .Seeing their faith, Jesus said to the paralytic, ‘’ my child your sins are forgiven.’’  Now some scribes were sitting there, and they thought to themselves,’’ How can this man talk like that? ‘’ ’He is blaspheming. Who can forgive sins but God? Jesus, inwardly aware of what they were thinking, said to them. ‘’Why do you have these thoughts in your hearts? Which of these is easier to say to the paralytic,’’ Your sins are forgiven you’’ or to say, ‘’Get up pick up your stretcher and walk? ’’ But to prove to you that the Son of Man has authority on earth to forgive sins,’’ he said to the paralytic-‘’ I order you get up, pick up your stretcher at once and go home. ‘’ And the man got up, picked up his stretcher at once and walked out in front of everyone, so they all praised God saying, ‘’We have never seen anything like this.’’

Healing and Forgiveness is very much part in this section of Mark’s account of the paralytic. Jesus’ praise for the four men who helped to lower him down through the roof, their faith.  His address, to the paralytic, ‘’ my child, your sins are forgiven.’’ This affectionate address is the focus. God our Father, Jesus is our way to you. In the cure and forgiveness of sins. God is praised, ‘’ we have never seen anything like this.’’

God our Father, Jesus is our way to you. Amen