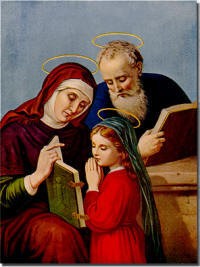 “Mary placed all her cares and all her troubles in the heart of God Alone.” (Ven. P. B. Noailles)

St. Joachim and St. Anne,  traditionally named parents of the Blessed Virgin Mary and grandparents of the Lord. Both received the vision of an angel,  who announced that they would be parents to a most wondrous child.  The couple rejoiced at the birth of their daughter,  whom they named Mary.  When Mary was three years old,  her parents,  in fulfilment of their divine promise,  brought Mary to the Temple at Jerusalem,  where they left her to be brought up.