Feast of St. Leo the Great, Pope & Doctor of the Church 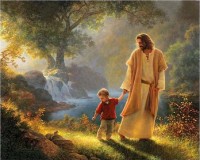 In first century Israel there was a strong sense of expectation about the coming of a Messiah who would defeat the Romans and set up the kingdom of God.  People were anxiously looking for apocalyptic signs of his coming.  In today’s gospel we find the Pharisees asking Jesus if he knows anything about when this kingdom of God might be established.  Jesus surprised them with his answer that the kingdom of God had already arrived.  Jesus himself was the kingdom of God. He told many parables about this kingdom but the Pharisees, even though they were scripture scholars, failed to comprehend their meaning.  They were too full of their own self-importance and self-righteousness to allow the word of God to enter their heart.  For the ones who became disciples of Jesus the word of God was like a seed silently growing in fertile soil.  How do we receive the word of God?  Does it take root in our hearts and colour our worldview?

Gracious Lord help us not to miss the opportunities for growth in your kingdom. Amen