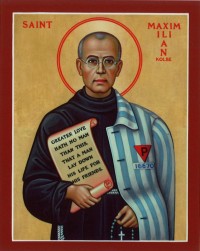 Today the Church celebrates the life and death of Maximilian Kolbe, a Polish Franciscan friar. In 1941 he was arrested by the Gestapo and sent to Auschwitz where he continued his priestly ministry – praying and consoling his fellow prisoners. An innocent young married man in the prison was sentenced to die by starvation in retaliation for a group who had escaped from the prison. Maximilian offered to take his place and his offer was accepted. He died some days later. Another prisoner said that Mammalian’s self- offering was like a powerful shaft of light in the darkness of the camp. Maximilian was canonised in 1982 as a “martyr of charity.”

Lord, give us the courage to stand against injustice and to reach out to those who suffer. Amen