Feast of St. Teresa Benedicta of the Cross (Edith Stein) 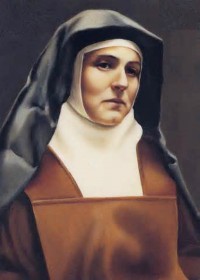 “Ten bridesmaids took their lamps and went to meet the bridegroom.  Five of them were foolish,  and five were wise.” (Matthew 25 : 1)

For Matthew,  light is equated with good deeds that are visible to others and that lead to the praise of the Heavenly Father.  The lamps and oil are the steps that the disciples need to take in order to be prepared for meeting the Lord.

St. Teresa Benedicta of the Cross (Edith Stein) became a Catholic in 1922 and later a Carmelite nun.  Both Jewish and Catholic she fled to Holland when the Nazis came to power but was captured and sent to Auschwitz where she died in its gas chamber on 9th August 1942.