Feast of The Nativity Of St. John The Baptist 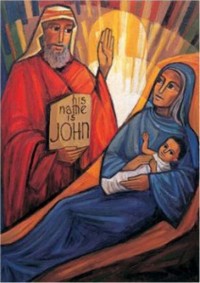 Family lines and family names were important to the Jews. In the Bible, name always designated a person’s character and vocation; a heavenly name announced a call to a special mission. The people naturally assumed that the child born to Elizabeth and Zechariah would receive his father’s name, or at least a family name. Thus, the people were surprised that both his parents – Elizabeth and Zechariah – wanted to name the boy ‘John’, as the angel had told them to do. Zechariah’s relatives talked to him by gestures, because he was apparently deaf as well as speechless and had not heard what his wife had said. So, Zechariah, wrote: “His name is JOHN.”

Lord help me to be courageous like John the Baptist and so proclaim you by my words and actions. Amen