Feast of The Passion of St. John the Baptist

August 29th, 2015
"Lord I shall expound your law before kings and not fear disgrace. I will ponder your decrees, which I have always loved." Antiphon 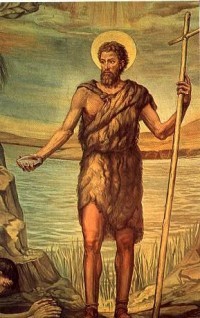 John became a preacher in the wilderness where he stayed.  His food was locusts and honey.  He preached.  A Baptism of Repentance was given to people who believed his words;  “Repent for the Kingdom of God is near.”   Because John spoke the truth to the King about his unlawful marriage to his brother Philip’s wife.  He was imprisoned and Herodias eventually had her revenge and John was beheaded.

Lord by these gifts we offer, keep us faithful to your way of life, which John the Baptist preached in the wilderness and to which he courageously witnessed by shedding his blood. Amen