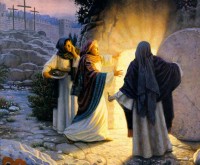 “Mary Magdalene came to the tomb and saw that the stone had been removed from the tomb.  So she ran to Simon Peter and the other disciple, whom Jesus loved and said to them; ‘They have taken the Lord out of the tomb,  and we do not know where they have laid Him.'” (John 20 : 1)

Mary Magdalene was with Jesus when he died on the Cross and she was one of the first at His tomb.  The women were at the tomb even before sunrise to embalm His dead body and they see two dazzling angels in white sitting where the body of Jesus had been lying.  Mary Magdalene told the disciples afterwards; ‘I have seen the Lord.’ (John 20 : 18)