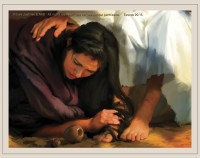 In the Gospel of John we are told that after the extraordinary miracle of the raising of Lazarus from the dead the Sanhedrin decided that Jesus should die.  So Jesus went into hiding for some time.  Today we find him, with some of his disciples, in the house of Lazarus, Martha, and Mary in Bethany.  He is a very welcome guest for whom a special supper has been laid on.  It was customary among the Jews at the time to provide scented water for the bathing of dusty feet before a meal.   Mary, however, went much further, she showed her devotion for Jesus by anointing his feet with extremely costly ointment and wiping them dry with her hair.   The scent of the ointment filled the whole house. Unconsciously she was preparing Jesus for his burial.   We are told that the cost of the ointment was significant.  It amounted to a labourer’s pay for a year.  Judas immediately started murmuring against such extravagance arguing that it would be better to give the money it would raise if sold to the poor rather than waste it on Jesus.   At this stage Judas was probably critical about everything concerning Jesus.  He had obviously given up on him as the kind of Messiah he wanted.  Mary, on the other hand, had listened attentively to Jesus during his previous visits and intuitively knew that he was the Holy One of God and truly deserving of everything she could give him.  The anointing of his feet with such precious ointment was a symbol of her total self-giving. Jesus was very appreciative and stood up for her.  Her action must have given great consolation to the heart of Jesus in the days of rejection that followed.

Prayer Lord Jesus we ask you to give us the faith of Mary of Bethany so that we too may be totally self-giving in our service to you and to one another. Amen
« Go back one day Go forward one day »