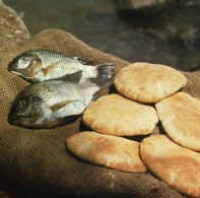 “The Multiplication of the Loaves.” (John 6 : 1 – 15)  Jesus went across the Sea of Galilee,  and a large crowd followed Him because they saw the signs He was performing on the sick.  When the people saw the signs,  some of them did not believe that Jesus did  multiply bread and fish.  They want to say that it was a sharing of the food that the people had brought in.  They don’t want to acknowledge Jesus’ miracle.  But the people in Jesus’ time really witness something extraordinary that they are full of hope to make Him King,  but Jesus has come neither as an earthly king nor as a wonder worker.  Jesus has come to conquer sin and death,  win human hearts,  and lead all people back to God,  Jews and foreigners alike.

Prayer Lord, we pray that you grant us hearts open to your abundant grace, and eyes of faith that help us see and trust in the signs of your presence that surrounds us. We make a prayer through Christ Our Lord. Amen
« Go back one day Go forward one day »