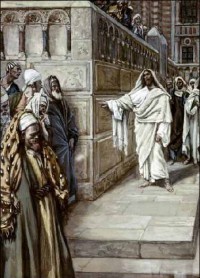 The Jews are God’s chosen people.  He entrusts them with His Kingdom that through them He will be known and recognised by other people.  He guides them in their formation as His own people in the hope that some day they will communicate the experience of God to others.  What God wants is,  that they will have a sense of community,  justice and commitment to values that will save the world.  But the Jews failed to co-operate.  They are convinced that they will be saved because they are Jews.  They do not concern themselves with the fate of other peoples or nations who have not known God.  So God sends His prophets to remind the people of their duty.  The prophets are persecuted.  When Jesus comes,  He gets the same treatment.  God resolves to transfer the responsibility regarding His Kingdom to a people who will be very trustworthy.

Prayer Lord, we pray for dialogue and mutual respect between Christians and Jews. Lord hear our prayer. Amen
« Go back one day Go forward one day »