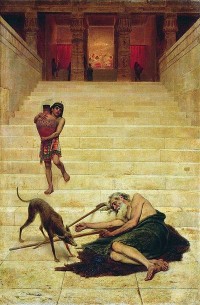 The parable of the Rich man and Lazarus speaks on the use of earthly riches.  In popular Jewish belief,  wealth is usually considered a sign of God’s favour.  If you are good living,  people believe God will reward you by making you rich.  Jesus ignores such false claims by the Pharisees.  Though He does not condemn the possession and use of material goods,  Jesus is concerned with peoples attitude towards these.  People should not become slaves to money,  and all that money can buy.  The rich man in the parable is not condemned for dressing elegantly and dining sumptuously.  He does not abuse the poor man,  Lazarus,  nor send his dogs to get him away from his door.  The Rich man is judged for his lack of concern for the poor man lying at his door.  He allows Lazarus to starve to death.  The parable drives home the point that wealth carries with it great responsibility.

Prayer Lord, help me to do unto others that which I would want done unto me. Lord hear my prayer. Amen
« Go back one day Go forward one day »