Third Week of Easter – Feast of St. Joseph the Worker 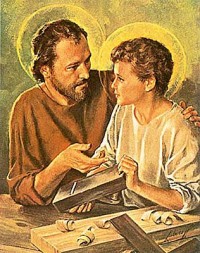 Today is the feast of St. Joseph,  Blessed Virgin Mary’s husband and father to Jesus while he was on earth. He is venerated as St. Joseph in the Catholic Church, Orthodox Church,  Oriental Orthodox Church,  Anglican Communion, Lutheranism and Methodism.  In both Catholic and Protestant traditions,  St. Joseph is regarded the patron saint of workers.  Pope Pius IX declared him to be both patron and the protector of the Catholic Church, in addition to his patronages of the sick and of a happy death,  due to the belief that he died in the presence of Jesus and Mary.   St. Joseph is regarded as a model for fathers.