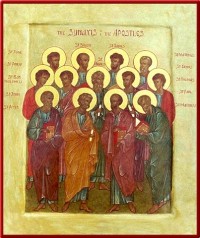 St. Philip asks to see and, having seen,  he tells the Good News to others.  He was born at Bethsaida and was formerly a disciple of John the Baptist until  he became a follower of Christ.   St. James,  the son of Alphaeus and a cousin of the Lord,  ruled the Church at Jerusalem,  wrote an Epistle,  and led a life of penance.  He converted many of the people of Jerusalem to the faith and was martyred in the year 62.