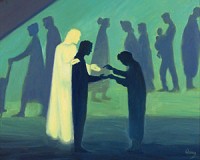 When Jesus spoke to the crowds many were converted.  Some, however, found his words disturbing.  He was turning their whole world upside down.  Among them were some Pharisees.  In today’s gospel we find them entering into alliance with their political opponents, the Herodians, in order to bring down the authority of Jesus.    The subject matter of the trap they set was the payment of the annual Roman tax, a subject which was hotly disputed by the Jewish people. If Jesus said “no” he would have been charged with conspiracy against Rome.  If Jesus had answered “yes” he would have lost the following of the crowds.  Instead of jumping either way Jesus asked to see the coin.  They handed him a denarius. Jesus looks at the coin and asks: “whose image is on this?” and “whose name?”   A denarius was a Roman coin with a graven image of Caesar and an inscription declaring that Caesar was the son of God.  The Roman coin was so taboo that it could not be used to pay the Temple tax.  Money changers had to exchange Roman coins for local money.  The Pharisees prided themselves on keeping the law of Moses and yet they were in possession of this coin. So Jesus demonstrated their hypocrisy  to them and the Pharisees realised that they had lost the debate.

Today is Mission Sunday and the theme chosen for this Sunday is: “That you may have life.”  Pope Francis urges us to immerse ourselves in the joy of the Gospel and share our faith and hope with everybody.    Today is also the day in which Pope Paul VI will be beatified at the closing Mass of the Extraordinary Synod of the Family.

Prayer Loving Jesus help me to spread your fragrance wherever I go; flood my life with your spirit and your life; penetrate and possess my whole being so utterly that my life may only be a radiance of yours. (Bl. Cardinal John Newman) Amen
« Go back one day Go forward one day »