THINGS BOTH OLD AND NEW

A comment from one of our recently elected T.D.s raised some eyebrows. He said there is nothing we can do about the weather, implying that whatever happens is due to the ‘Man above’! The early Russian astronauts returned from outer space declaring that they had found no trace of heaven! Indeed, many of us also may still be operating out of the old concept that God is outside creation.

Long before Science opened up the ‘New’ Story of the Universe and explained the inter-connectedness of all creation, 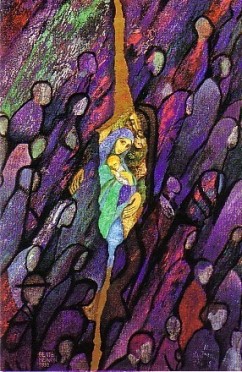 the story was already told in the prayers of the Bible – viz. the Psalms. “The heavens proclaim the glory of God…” (Psalm 19). The earth has a voice to praise God. Our Celtic poets and writers gave us an insight into the way they were able to integrate Christian spirituality and love of nature. Compassion for nature was also a strong part of the faith of our ancestors.

We have been celebrating our poets of Easter week and we discover that they were well clued into the belief that God is within the works He has created: “I see his face in every flower, the thunder and the singing of the birds are but His voice… his strong heart stirs the ever-beating sea…” God’s word is inscribed within our hearts and across the universe. St. Paul, too, reminds us that it is in God we live and move and exist.

In order to grow in our faith, we need to let go of the certainties and securities of the past and move into new ways of relating to the whole of creation. The ‘official’ church has been moving slowly, but we have been blessed with some great theologians and others who are helping us to find the meaning of our faith in relation to the rest of our life and in the context of an evolving universe. Pope Francis has said that we all bear responsibility to “protect and value creation for the good of this and future generations”.

While most of us will say that we have been rooted in a particular place or in a particular family, Thomas Merton, the renowned Trappist monk, wrote: “God has given me roots in eternity”. He speaks of “sitting in the darkness to hear the eloquent night.” His life as a monk was a journey of self-understanding, of self-discovery.

The prayer of Christ for unity – “May they all be one”– takes on a new significance and a challenge for all of us. It is important for us to be aware that everything in creation is inter-related and interdependent. We need to be attentive to find a new and fresh experience of God’s love within each day. The early Christians met in their homes to pray together, to share the Good News, and to ensure that “there was not a needy person among them”. This same practice continued into the third century and beyond Jerusalem as far as North Africa. St. Cyprian of Carthage wrote to his friend Donatus as follows: “It’s a bad world, Donatus, in which we live. But right in the middle of it I have discovered a quiet and holy group of people. They are people who have found a happiness that is a thousand times more joyful than all the pleasures of our sinful lives. These people are despised and persecuted, but it doesn’t matter to them. They are Christians, Donatus, and I am one of them.”

There are also small ‘cell’ groups in our parish of Newbridge who are praying and carrying forward that same message Christ entrusted to his first followers – “that all might be one”.