Religious orders praised for their support of WMOF 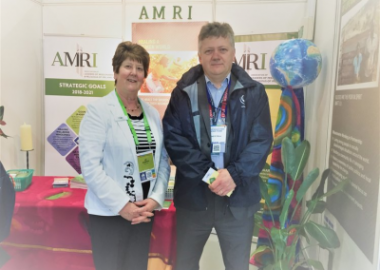 A Bank of Ireland senior executive, who was seconded as head of financial development for the World Meeting of Families in Dublin, has heaped praise on the many religious communities who backed the event financially as well as individual religious who gave their time and support as volunteers.

Niall O’Shea, who was released by the Bank of Ireland to assist the organisers raise tens of millions in funding said: “The religious orders were involved and enthused about WMOF2018 from the beginning of preparations. From their profiling of the WMOF2018 as part of the various publications published and edited by Irish religious, there was a commitment to the work we were doing.”

The acknowledgement is echoed by Sr Liz Murphy RSM, Secretary General of AMRI (the Association of Missionaries and Religious of Ireland), who was instrumental in drawing in religious as the preparations took shape, after attending an early meeting of the organisers in May last year. Sr Liz recalls: “I felt, where are all of the religious in all of this?” Sr Liz subsequently invited congregational leaders, provincial leaders and bursars to come together and find out for themselves about the visit and how they could contribute directly to the costs. “I kept putting people in touch with Niall O’Shea!” she laughed.

Sr Liz is also joyful about the fact that Irish contemplatives were drawn into the preparations by receiving prayer requests which had been handed in by people who viewed the specially created icon that toured Ireland over the past year. Joy, as well, that “loads of contemplatives” turned up at the RDS as well as at the Papal Mass at Phoenix Park.

The Redemptoristine Sisters in Dublin played a central role in the writing of the icon and from time to time they took it home to refresh and touch up during its mammoth tour of each of the 26 dioceses in Ireland as well as a trip to Rome. Said Niall O’Shea: “You cannot talk about the WMOF2018 without mentioning the Redemptoristine Sisters in the same breath.” (view the video on www.corew.org).

He also is deeply grateful that many of those who signed on as volunteers for the event were members of religious orders: “They worked with us on all the local and national preparations for WMOF2018. They are too many to mention one by one. They worked with us before and during our events, doing general volunteering, singing in the choirs, making themselves available to hear confessions at the larger WMOF2018 events, making themselves available as media volunteers to offer commentary on the events…….. Members of religious orders were the heart and soul of many of our volunteer teams.”

At the WMOF2018 Pastoral Congress there were many members of religious orders on panels and taking part in discussions. They were visible at the daily celebration of the Eucharist and on the campus where, several times, they were spotted sitting with attendees in quiet moments of prayer and reflection. Some of the high profile speakers were members of religious orders too.

Niall recalls how “several members of the media commented on the visibility of male and female religious order members, with one commentator describing the Festival of Families playfully as ‘Electric Picnic for Nuns!’ But the impact of this visibility of religious is something not to be underestimated argues Niall: “Our events were largely attended by families. It is in families that the seeds of vocations are sown and therefore the visibility and availability of so many religious at our events is something to be encouraged in terms of fostering conversations about vocations [and vocations themselves] to priesthood and religious life.”

A Dominican who was present at the RDS, Fr Bernard Treacy OP, Director of Dominican Publications (pictured to the right) commented: “The visible presence of so many religious alongside families, specially at the Pastoral Congress, made visible that the whole family of the church was committed to celebrating the Gospel of the Family.”

Another aspect of the gathering was a pilgrim walk through Dublin; of the seven churches involved, four were attached to religious communities: Carmelite, Discalced Carmelite, Dominican and Jesuit, and another is a parish staffed by the Capuchins, from the same community that Pope Francis visited.

Looking back on all the months of preparations, Niall O’Shea says it’s important, aside from all the practical arrangements that religious were involved with, to not forget one other crucial aspect: “There was a huge programme of prayer that was undertaken for almost a whole year by the religious communities in Ireland. ”