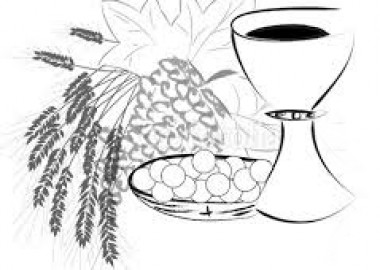 Corpus Christi: Be what you receive

Some years ago, Franciscan Friar Scott Surrency composed a poem “Can you drink the cup?” and the opening verses pose the key question of today’s liturgy.

Can you drink the cup?

Drink, not survey or analyse,

take into you so that it becomes

a piece of your inmost self.

The poem creates a question from the challenge St. Augustine gave his people when he preached on the sacrament of the Eucharist in the fourth century. When Augustine spoke of the body and blood of Christ in the Eucharist, he said they “are called sacraments because in them one thing is seen, while another is grasped. … What is grasped bears spiritual fruit.”

Today’s liturgy guides us through the religious developments that led to our Eucharist. We begin as Moses leads his people in a spectacular liturgy of sacrifice. In what was almost participatory theater, the people renewed their covenant with the God who had led them out of Egypt and gave them commandments to assure a good life. The people listened and kept silence while Moses wrote. At the climax, he sprinkled them with blood representing the life they shared with God and would lose if they were unfaithful.

This celebration evolved into the Temple liturgies that kept Israel conscious of her covenant relationship with God. They provide the context for the portrayal of Christ as the final high priest in the Letter to the Hebrews, showing how he accomplished once for all what Moses and his successors celebrated with their people. Hebrews explains that the priests used animal blood to cleanse a defiled people, but Christ who shed his own blood, cleansed or transformed people’s consciences. Christ gave them new access to God whose reason for creation was to share life with them.

Mark’s account of Jesus’ last supper with his disciples brings this theology down to earth. When the disciples talk to Jesus about his (own) Passover, he reminds them that eating that meal together pledges them to share the same commitment and fate. While they were at supper, Jesus shockingly altered their ritual prayers. Instead of thanking God for the saving actions of the past, Jesus added his own name to the traditional litany of blessing. By doing so, he bade his friends to partake in his own self-giving.

When Jesus took the cup, a blessing cup they were accustomed to sharing, he gave it to them and they all drank of it. After they had drunk, he explained that it was the cup he had promised they would drink with him (Mark 10:39). It was their share in the cross he would take up, the symbol of losing their lives for him and the Gospel in such a way that by losing their life they would be saved. When they drank from that cup they signed a blank check of solidarity with him and his cause. They pledged themselves to full communion with him and he with them.

Today we are bidden to ponder Christ’s question, “Can you drink the cup? Do you want this communion with me?” We are tempted to join Jesus’ followers who too easily answer, “Yes! We want to see your glory!” Like the disciples who asked Jesus where they should prepare for him to go through his Passover sacrifice, we facilely thank God for the eucharistic presence. We behave with reverence in our temples and pray, “I am not worthy … but only say the word” before we process to the altar to receive the Eucharist. But Christ doesn’t let his disciples off so easily. After he said, “Take and drink,” he said, “This is my blood of the covenant, which will be shed for many.” That was what they took in so that it could become a part of their inmost self.

When Augustine taught about the Eucharist he offered these insights:

So now, if you want to understand the body of Christ, listen to the Apostle Paul speaking … “You are the body of Christ, member for member” [1 Corinthians 12:27]. … You are saying “Amen” to what you are: your response is a personal signature, affirming your faith. … Be a member of Christ’s body, then, so that your “Amen” may ring true!

In the Communion procession, Christ calls us beyond our hymns to where we can truly grasp what he offers. Christ says to us, “Receive what you are and become what you receive; be flesh and blood given for the life of the world.”