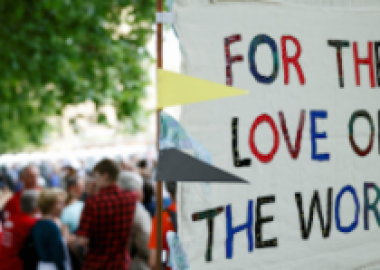 The Vatican released a document on Thursday that offers a guide to all Christians on our relationship with God’s Creation. Entitled: ‘Journeying for the care of the common home’, the document was issued on the fifth anniversary of Pope Francis’ encyclical Laudato sí, which was signed on 24 May 2015 and published on 18 June that year.

The document was drafted by the Holy See Interdicastery Table on Integral Ecology, created in 2015 to evaluate ways to best promote and implement integral ecology. Institutions linked to the Holy See, along with several Bishops’ Conferences, and Catholic organisations, make up the committee.

The text was written prior to the Covid-19 pandemic, but it highlights the main message of Laudato sí: Everything is connected; each particular crisis forms part of a single, complex socio-environmental crisis that requires a true ecological conversion.

The first part of the document opens with a reminder of the need for ecological conversion.

This involves a change in mentality leading us to care for life and Creation, dialogue with others, and an awareness of the deep connection between the world’s problems.

Initiatives such as the ‘Season of Creation’ , it says, should be enhanced, along with monastic traditions that teach contemplation, prayer, work, and service. These initiatives can help educate people about the link between personal, social, and environmental balance.

The document then reaffirms the centrality of life and the human person, because “nature cannot be defended without the defence of every human life.” From this fact, derives the need to develop the concept of “sin against human life” among younger generations, which can help contrast the “throwaway culture” with a “caring culture”.

The text also places strong emphasis on “the family as a protagonist of integral ecology.” When grounded in the basic principles of “communion and fruitfulness,” the family can become “a privileged place for education where one learns to respect human beings and Creation”. States, therefore, are urged to “promote smart policies for family development”.

Schools are invited to acquire “a new centrality,” in other words, to become a place to develop the capacity for discernment, critical thinking, and responsible action. The document offers two suggestions in this regard: (1) to facilitate links between the home, the school, and the parish; and (2) to launch training projects for “ecological citizenship”, which should promote among young people “a new model of relationships” that goes beyond individualism in favour of solidarity, responsibility, and care.

Universities are invited to centre their curricula on a backbone of integral ecology. Through their three-fold mission of teaching, research, and service to society, universities need to encourage students to engage in “professions that facilitate positive environmental change.” The document suggests specifically that students should “study the theology of Creation, which consists in the relationship of the human being with the world,” while remaining conscious of the fact that caring for Creation requires “ongoing education” and a true “educational pact” between all institutions involved in education.

The document also reaffirms that “the commitment to caring for our common home is an integral part of Christian life,” and not a secondary option. It states that care for our common home is “an excellent area” to build ecumenical and interreligious dialogue and collaboration. The “wisdom” found in various religions, it says, can encourage a “contemplative and sober” lifestyle that leads to “overcoming the deterioration of the Planet.”

The first part of the document concludes with a chapter dedicated to communication and its “profound analogy” with the care of our common home. Both, in fact, are based on “communion, relationship, and connection”.

In the context of an “ecology of the media”, the media are urged to highlight the links between “human destiny and the natural environment”, while empowering citizens, and combating “fake news”.

The second part of the document focuses on Integral ecology and integral human development. It opens on the subject of food, referring to Pope Francis’ words: “whenever food is thrown out it is as if it were stolen from the table of the poor” (LS, 50). Food waste, therefore, is condemned as an act of injustice.

The document calls for the promotion of “diversified and sustainable” agriculture, defence of small producers and natural resources, and the urgent need for healthy food education, both in quantity and in quality. There is also a strong call to combat phenomena such as land grabbing and major agro-industrial projects that pollute the environment, as well as an appeal to protect biodiversity.

Echoes of this appeal can also be found in the chapter devoted to water, access to which is “an essential human right”. Here, too, there is a call to avoid waste and to go beyond the utilitarian criteria that lead to the privatisation of this natural good.

There is also an invitation to reduce pollution, to de-carbonize the energy and economic sectors, and to invest in clean and renewable energy, making it accessible to all.

The seas and oceans are at the heart of integral ecology. They are the “blue lungs of the planet,” and require governance focused on the common good of the entire human family and founded on the principle of subsidiarity.

The document also stresses the urgent need to promote a “circular economy” that does not aim at over-exploitation of productive resources, but at their long-term maintenance, so that they can be reused. We must overcome the concept of “rejected waste”, it says, because everything has value. This, however, will only be possible through positive interaction between technological innovation, investment in sustainable infrastructure, and growth in resource productivity.

The private sector is called upon to operate transparently in the supply chain. The document goes on to call for the reform of fossil fuel subsidies and the taxation of CO2 emissions.

In the field of labour, the document expresses hopes for the promotion of sustainable socio-economic development, so that poverty might be eradicated and the marginalised might find paths toward socio-professional advancement. It also calls for decent work, fair wages, efforts to combat child labour, and an inclusive economy which promotes the value of the family and motherhood, along with the prevention and eradication of “new forms of slavery”, such as human trafficking.

The document says the world of finance needs to play its part, by aiming for the “primacy of the common good” and working to put an end to poverty. “The Covid-19 pandemic shows how elements of the system are being questioned, when it reduces welfare, allows speculation even in misfortune, and oppresses the poorest people.”

The document urges government to close tax havens, sanction financial institutions involved in illegal operations, and bridge the gap between those who have access to credit and those who do not. It exhorts everyone to promote “a style of management of the Church’s goods that is inspired by transparency, coherence, and courage”, based on a perspective of integral sustainability.

Within civil institutions, the document stresses the “primacy of civil society”, which politics, governments, and administrations must serve. It calls for the globalisation of substantive, social, and participatory democracy, and a long-term vision based on justice, morality, and the fight against corruption.

The document says an important aspect is the promotion of access to justice for all, including the poor, the marginalised, the excluded. It also encourages governments to “rethink prudently” the prison system, in order to promote the rehabilitation of prisoners, especially young people serving time for their first conviction.

The text then focuses on healthcare systems, calling it “a question of equity and social justice.” It reaffirms the importance of the right to care. “As ecological networks are degraded social networks are also broken down. In both cases, it is the poorest who suffer the consequences”. The document offers concrete suggestions, including an examination of the dangers associated with “the rapid spread of viral and bacterial epidemics,” and the promotion of palliative care.

Finally, the document examines the issue of climate change, saying it has “a profound environmental, ethical, economic, political, and social ‘relevance'” which “impacts the poor above all.” Therefore, we first need “a new model of development” that links the fight against climate change to the fight against poverty, “in tune with the Social Doctrine of the Church”.

Recalling that “no one acts alone”, the document calls for a commitment to “low carbon” sustainable development to reduce greenhouse gas emissions. Proposals made in this area include the reforestation of areas such as the Amazon rainforest, along with support for the international process aimed at defining the category of “climate refugee” to ensure them “necessary legal and humanitarian protections”.

The last chapter of the text is dedicated to the commitment of Vatican City State.

There are four operational areas in which the implications of Laudato sí are applied are: (1) environmental protection (eg sorted waste collection already established in all Vatican offices); (2) protection of water resources (eg closed circuits for fountain water); (3) care for green areas (e.g. progressive reduction of harmful phytosanitary products); (4) reduced consumption of energy resources (e.g. in 2008, a photovoltaic system was installed on the roof of the Nervi Hall, and new energy-saving lighting systems were installed in the Sistine Chapel, St Peter’s Square, and the Vatican Basilica, reducing costs by 60, 70, and 80 percent, respectively).