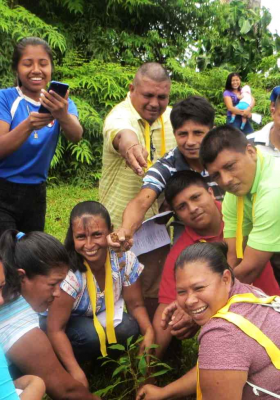 The Global Healing initiative is the Catholic Church in England and Wales’ response to the Pope’s Encyclical ‘Laudato Si’. In it Pope Francis calls for dialogue and action concerning the care of ‘our common home’, and in which he urges all of us to make changes to our lifestyles so as to combat environmental degradation. He describes the Earth as looking “more and more like an immense pile of filth”.

The Global Healing initiative is particularly relevant in the light of the Report from the Intergovernmental Panel on Climate Change, which tells us that unless governments and individuals immediately and significantly change their lifestyles in these major areas – land use, energy, transport and industry – the future for the planet is very bleak. And we are given a very short time in which to act to avert disaster.

As part of the Global Healing initiative, the Bishops’ Conference of England and Wales have produced two films. The main film lasts for 33 minutes. It describes the damage that humankind is doing to the planet and to its inhabitants, and the resultant environmental emergency we are facing. The second film, ‘A Practical Response’, is 14 minutes long and suggests changes we can make to our lifestyles at home, at work and in our parishes to help reverse that damage. There are several pauses during both films for group discussions.

The Global Catholic Climate Movement (GCCM), which aims to activate the world’s 1.2 billion Catholics to tackle the climate crisis, runs an online course to educate and empower people to bring the Laudato Si’ Encyclical to life. The Laudato Si’ Animators are people, mainly Catholics, who have graduated from this course, and are keen to inspire others in parishes, in schools and in the world at large to engage in dialogue and action on the current environmental crisis. We do this by promoting the messages in Laudato Si’.

In Lent 2021, with the expertise of GCCM, the animators produced an online course in which we screened the Global Healing films including the follow up Global Caring films, with Talks, Question and Answer opportunities and the Chat facility. All aimed at presenting the environmental crisis and encouraging participation in reversing it, through action and dialogue in our parishes, homes and at work.

The Course was very successful, with over 900 people registering to take part. There were six sessions, each with an inspiring speaker, talking about a range of topics including ‘Ecological conversion’ ‘Living in harmony with God’s creation’ and ‘Hope for the future’, and we shared prayers and readings. We sent out a handout after each session, with prayers, reflections, news and suggested actions relevant to the session. The feedback was very encouraging. Here are a few of the comments we received: “Thanks for an excellent session this evening”, “Thank you for a great webinar”, “Many thanks for last night – it was excellent”, “Last night was just so brilliant”, “The sessions are simply wonderful”, “A brilliant start today, thank you”.

We have gained new supporters from the course, widening our network of people in the dioceses who want to be environmentally active. We are confident that we have focused minds and hearts on ‘Laudato Si’, and that seeds we have planted will grow. Laudato Si Animators UK will give support and backup, providing a network of supporters and activists, for ideas for action that others might like to develop. They can be contacted through John Woodhouse, email: johnwoodhousecat@gmail.com