Pope: human trafficking a crime of the “commercialization of the other”

Pope Francis on April 11 addressed participants in a Vatican conference that examined the implementation of the Pastoral Orientations on Human Trafficking.

Pope Francis on Thursday condemned trafficking in human beings as one of the most dramatic manifestations of the “commercialization of the other”, a crime against humanity that disfigures both the victims as well as those who carry it out.

“Those who commit this crime do not only harm others, but also themselves.”  “In its many forms, it constitutes a wound ‘in the body of contemporary humanity’”, a profound wound in the humanity of those who suffer it and those who carry it out,” the Pope told participants in a conference studying the implementation of the Pastoral Orientations on Human Trafficking by the Vatican’s Migrants and Refugees Section.

The Holy Father lamented the “growth of individualism and egocentricity” in our times, that tend to consider others in a merely utilitarian perspective, attributing value to them according to criteria of convenience and personal advantage. This is essentially a question of a “tendency towards the commercialization of the other,” which the Pope said he has repeatedly denounced.  And “among the most dramatic manifestations of this commercialization is the trafficking in persons,” the Pope said.

Using the words of Jesus in John’s Gospel as the yardstick of the Church’s mission of mercy – “I have come that they may have life and have it in abundance” (John 10:10) – Pope Francis said  that “trafficking disfigures the humanity of the victim, offending the person’s freedom and dignity.”  “At the same time,  it dehumanizes those who carry it out, denying them access to ‘life in abundance’.”

The Pope explained that trafficking constitutes an unjustifiable violation of the freedom and dignity of the human being willed and created by God.  For this reason, he said, trafficking it is to be considered a “crime against humanity”.

On the contrary, all actions aimed at restoring and promoting the human dignity of the survivors of trafficking are in line with the saving mission of Christ and His Church.  This, the Pope said, benefits our own humanity, opening the way to the fullness of life, the ultimate goal of our existence.

The Holy Father expressed admiration for those in local Churches and the many religious congregations who work, including networking with others, in order to fight the scourge.

He noted that much has been done and is being done in the fight against trafficking, but that much remains to be done.   He encouraged the coordination of various pastoral initiatives, both at local and international levels, and encouraged that they join forces to tackle the problem in countries of origin, transit and destination of the people being trafficked.

In order to be more effective, the Pope said, the Church needs also take the help of other political and social actors. 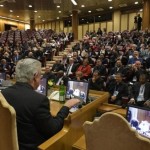