On Sunday 3 February 1822 Fr Noailles was unable to be present, as was his custom, to give Benediction of the Blessed Sacrament at the convent in Mazarin Street, Bordeaux. He asked Fr Delort, a local priest, to replace him.

Scarcely had Fr Delort placed the Blessed Sacrament in the monstrance when, instead of the host, the head and upper part of the body of a young man of extraordinary beauty, surrounded by a brilliant halo, were distinctly seen. His face was of dazzling brightness and he appeared to be about thirty. He had fair, shoulder length hair and a red sash passed over his shoulder and across his breast..

His left hand rested on his heart and his right hand was stretched out in blessing towards the people in the chapel. They included the sisters, the orphans in their care, some parishioners from the locality and the altar boy.

Though not everyone saw the apparition all testify to a remarkable experience. For some, it was an overwhelming sense of the Divine presence and all speak of an impression of dazzling brightness and light infusing the chapel. 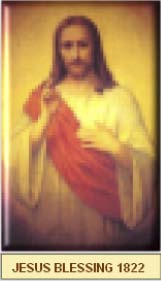 One Sister, who did not see the apparition, but had her eyes closed in deep prayer, heard these words in her heart:

They seemed to set the seal on Pierre Bienvenu’s motto: God Alone

The miraculous apparition lasted for about twenty minutes. Fourteen accounts of the event were collected and sent to the Archbishop of Bordeaux who carried out a thorough investigation into the event. He felt compelled to acknowledged the authenticity of the wonder and granted the sisters’ request to celebrate it each year on 3 February

Fr Delort concluded his testimony with the following:
“Some believed what I said; others treated me as a visionary.
Be that as it may, I declare what I have seen, what I have, so to speak, touched with my own hands and, though my testimony may have little weight, I should consider myself the most ungrateful and blameworthy person if I did not bear witness to the truth.”

This event confirmed Fr Noailles in his resolve to continue the work he had begun in spite of difficulties and obstacles, convinced that it was indeed God’s work:

“My great desire, as my most constant prayer to the Lord, is to see a continuation of the good which Jesus himself came to bless and encourage in a visible manner, a blessing which, to this day, has borne such abundant fruits.”