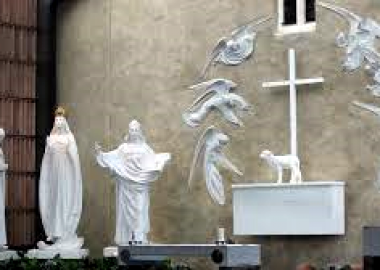 Pope Francis will formally designate Knock as an International Marian and Eucharistic Shrine on the Feast of Saint Joseph, Friday 19 March, in a homily which will be transmitted via video link at the Mass in the Shrine Chapel.

Welcoming the news, Archbishop Michael Neary said: “This is a hugely significant milestone in the history of the Shrine.

“Since that August evening in 1879 pilgrims have been coming here to Knock, recognising their dependence on God and the way in which God’s mother reaches out and cares for them. In the last 50 years this Shrine has been honoured by the visit of Pope John Paul II in 1979, Saint Teresa of Calcutta in 1993 and in 2018, Pope Francis.

“In 1979 Pope John Paul II emphasised that he was coming as a pilgrim and representing a pilgrim Church journeying throughout the world. The Pope recognised the way in which our world was changing so rapidly and he acknowledged that while many different voices assailed the Christian in today’s wonderful but complicated and demanding world and so many voices are heard to conflict with the word of the Lord, yet we gain hope and confidence from our relationship with Our Lady.

“When Mother Teresa spoke here she heralded the sacredness of human life of the unborn. Three years ago Pope Francis prayed here that ‘amid the storms and winds that buffet our times, may families be a bull-work of faith and goodness, resisting in the best traditions of this nation all that would diminish our dignity of men and women created in God’s image and called to the sublime destiny of eternal life.’

“In view of the way in which the two Papal visits – 1979 and 2018 – and Mother Teresa, had acknowledged the international dimension of the Shrine, I, with the approval of the Bishops’ Conference, petitioned the Holy See to designate Knock as an International Shrine. It is a source of great joy to join with Father Richard Gibbons, the Parish Priest whose devoted ministry in Knock is most impressive, and with our people in expressing our profound gratitude to Pope Francis for acceding to my request. ”

“The Archbishop said: “I wish to express my profound gratitude to the Apostolic Nuncio, His Excellency Archbishop Jude Thaddeus Okolo, the Primate of All Ireland Archbishop Eamon Martin, my brother Bishops, the President of the Pontifical Council for promoting the New Evangelisation, Archbishop Fischella, all of whom have been most helpful in securing this recognition for Knock. In the preparation of the material for this designation I am deeply indebted to the Diocesan Secretary of the Archdiocese of Tuam, Father Francis Mitchell, for his canonical experience and expertise.

“This Feast of Saint Joseph is very appropriate to establish Knock as an International Marian and Eucharistic Shrine. Saint Joseph appeared with Our Lady, Saint John the Evangelist and the Lamb of God on that August evening.”

In December last year, Pope Francis declared 2021 as the year of Saint Joseph, a declaration that bears particular significance for Knock as Saint Joseph appeared, together with Our Lady, Saint John the Evangelist, and the Lamb of God in the Apparition in 1879. Pope Francis visited Knock Shrine in 2018 as part of the World Meeting of Families celebrations.

Pope Francis will deliver a special message via video link recognising Knock Shrine as an International Marian and Eucharistic Shrine during Mass at 7:30pm on Friday the 19 March. The Mass will be celebrated by Archbishop Michael Neary, Archbishop of Tuam and concelebrated by Father Richard Gibbons, PP and Rector of Knock Shrine. 19 March is also the day that Pope Francis will celebrate the 8th anniversary of his inauguration as Pope.

The Apparition scene at Knock has deep liturgical meaning, symbolic richness and has been the subject of theological study and contemplation for generations. Unique to the Apparition at Knock is the representation of the Eucharist as the risen Lord which appeared as the Lamb on the altar, standing before his Cross and surrounded by a host of angels. This aspect of the Apparition was detailed by the fifteen witnesses who, on 21 August 1879, stood in pouring rain for two hours reciting the rosary before the Apparition scene.